BTC RECORDS HIGH CORRELATION  WITH GOLD.
Bitcoin’s halving reduces BTC issuance and prepares the cryptocurrency to “take-off”.The crypto market is bleeding out. In the top 10, losses in the last 24 hours range from at least 2% to 8% in the extreme case of Polkadot. However, Bitcoin has managed to maintain its gains. A Coinmetrics report shows some bullish indicators for the cryptocurrency and predicts an extension of its rally.

At the time of publication, Bitcoin (BTC)is trading at $13,306 with gains of 1.48%, while the cryptocurrency managed to maintain that level of support after dropping $300 yesterday. In the weekly and monthly charts, Bitcoin recorded gains of 2.74% and 22.77% respectively. Ethereum and XRP show a 7% loss in the last week.

In the referred report, Coinmetrics indicates that after the announcement of the Covid-19 pandemic, when the market collapsed, Bitcoin has “been growing in ways we hadn’t seen in previous bull runs”. Therefore, they indicate that the fundamentals of the cryptocurrency point to a major price breakout.

BTC has often been referred to as digital gold, and data is increasingly supporting that claim. In the past few months public companies such as MicroStrategy and Square have announced that they are buying and holding BTC as a treasury reserve asset. Additionally, on-chain data shows that since March 12th BTC holding (aka HODLing) has increased while price has risen.

In support of the above, the percentage of BTC supply that has remained unmoved for a year is at its highest level with more than 62.5%.

At the same time, Bitcoin’s network registered its all-time high in the number of holders with more than $100. On October 22nd, this metric stood at 9.74 million. The trend suggests that BTC holders are increasing and indicates a positive sign for Bitcoin adoption. 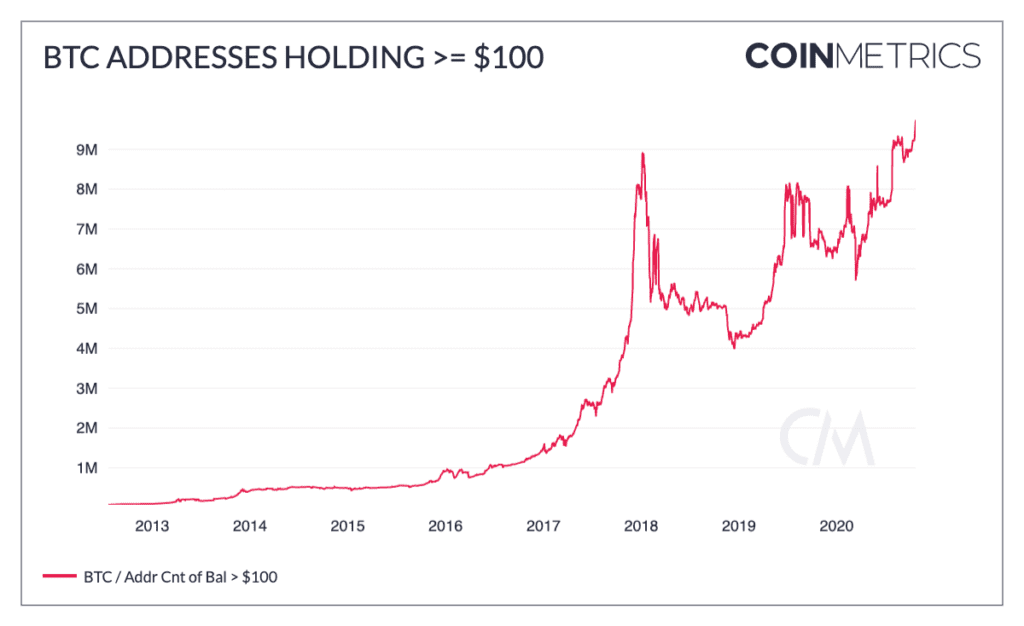 During 2020 there has been an increase in the percentage of BTC holders who have moved their BTC from centralized exchanges. This indicates an increase in the number of individuals who have preferred to have custody of their BTCs. Coinmetrics’ most important finding is related to the issuance of BTCs, which has declined significantly after its halving:

Historically, BTC price has hit a local peak within 1.5 years of each previous halving. With holding activity increasing and the halving less than six months in the rearview, all signs are signaling that BTC is poised for takeoff. 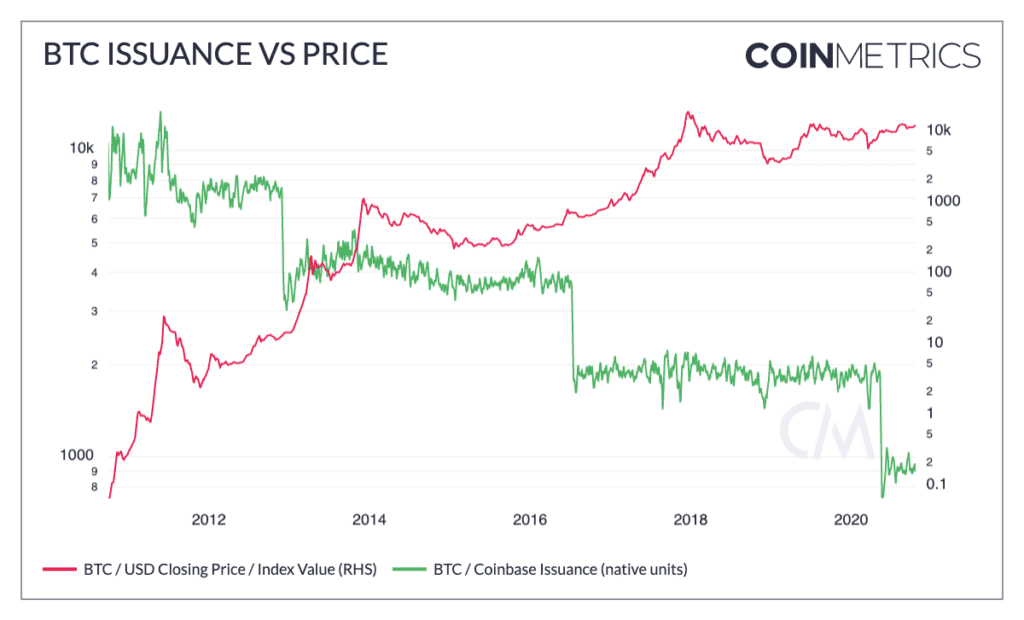 In that sense, crypto trader and investor Josh Rager has stated that 24 weeks after the halving, Bitcoin is “on track to reach new highs”. Rager made a comparison between Bitcoin’s price after the 2016 halving and the current one and believes that Bitcoin will make a significant move in the coming months.